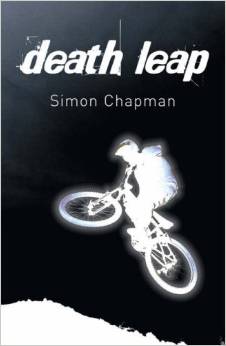 Jake saw a murder. The Killers saw Jake. Now the killers are after him…

Simon adds “Last year I took my mountain bike on holiday with me to Cornwall. There was a bike trail – The best bit was getting down to the trail which was in a deep valley. There was a set of old quarries with tracks that I would race down everyday and explore. One led down a steep gravel slope then over an old bridge.

I thought ‘what if that bridge was broken?- would I dare jump the gap?’ I would be going fast enough. ‘What if someone was chasing me- would I take the risk then?’

That was the ‘Death Leap’ that I built the ideas around- helped with extra ideas from from some of the Year 11 boys that I teach at Morecambe High School.”.