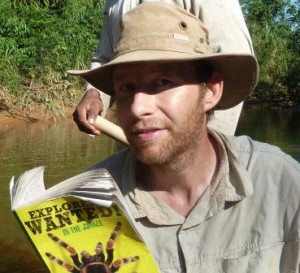 Crocodiles eyes light up when you shine a torch at them. They glow bright orange, especially when you hold the torch as close as possible to your own eyes so that the light reflects straight back.

My ‘break’ into writing was being bitten by a crocodile. It was only small- about a metre long- a Jacare caiman- and I had spotlighted it across a narrow creek in the Bolivian part of the Amazon rainforest.

My jungle guides had said that if I wanted to sketch another crocodile, then I would have to catch one myself. So I did. Well, nearly. I dazzled it with a torch beam in its eyes, then ‘went for it’.  “By the tail or by the neck”, my guide whispered; “It makes no difference provided you are quick”. 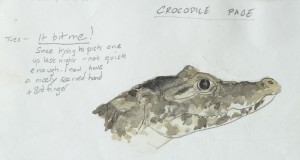 I opted for the tail and yanked hard. This was a mistake. The crocodile arched its back round and bit my hand. For a second it dangled by its teeth and I tried to shake it off, rippling my fingers as the reptile flew into the water with a loud splash.  Here’s a picture of that crocodile or maybe it was one of its brothers we caught later that evening. 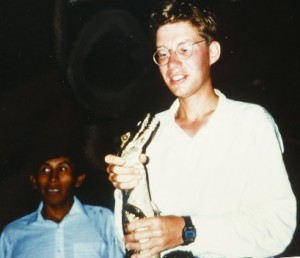 Leo Janco and I with ‘my crocodile’. Leo’s brothers and friends have been my guides on my Bolivian jungle expeditions.

I went on to write up the whole story, recorded it for radio and got it published in a magazine. It became the opener for my first book, ‘The Monster of the Madidi’.

It was thanks to that small crocodile that my stories got into print! It’s also that same rainforest that I keep returning to. Have a look at the pictures and videos on the website and hopefully you will see why I think it’s such a special place.